I’ve had some really great colleagues over the years — one such brilliant individual was a gentleman named Quinn who managed the Support Team. When working through a revamp of our customer community a few years ago Quinn and I found ourselves at loggerheads. We kept circling back to the same issue that we just couldn’t seem to find middle ground on.

When we dug into it further, we discovered that we’d each been given incongruous goals — one could not succeed without the other failing. This wasn’t a problem of us not being able to find agreement, it was misalignment on the goals we’d been set.

This is a theme that has come up again and again for me in my career.

It was particularly frustrating in the situation with Quinn because we were both in the same (at the time relatively small) department, but goal misalignment is much more common across different departments within an organization.

So how do you ensure that everyone is aligned on goals?

First and foremost you need have clear company goals, and everyone needs to understand them (ubiquitous, simple, outcome-oriented language can help with that). Also, company goals need to be in place before goal-setting is done further down the chain (ie. If different departments begin planning before company goals are set and understood, they’ll likely end up on different pages).

But this is where it gets tricky.

Direction is best when it’s a balance of balance of top-down and bottom-up, both to build buy-in across the organization and to ensure that great ideas are filtered up. That being said, there are some key things that you can focus from each direction.

Goal-setting frameworks can be useful in building processes for alignment, but will never replace a simple understanding of how you’d like to set goals as a company.

The Objectives & Key Results (OKR) Framework used by Google is currently very popular and can be useful in breaking down large company goals into chunks of work for teams and individuals. I’ve had varying degrees of success using it and would suggest starting with simple company and team goals before diving right into OKRs. As mentioned above with any framework, once you understand how you’d like to goal-set as an organization, OKRs can be a super useful way of executing that.

People will try to achieve whatever goals you set them.

This is so important I’m going to say it again: 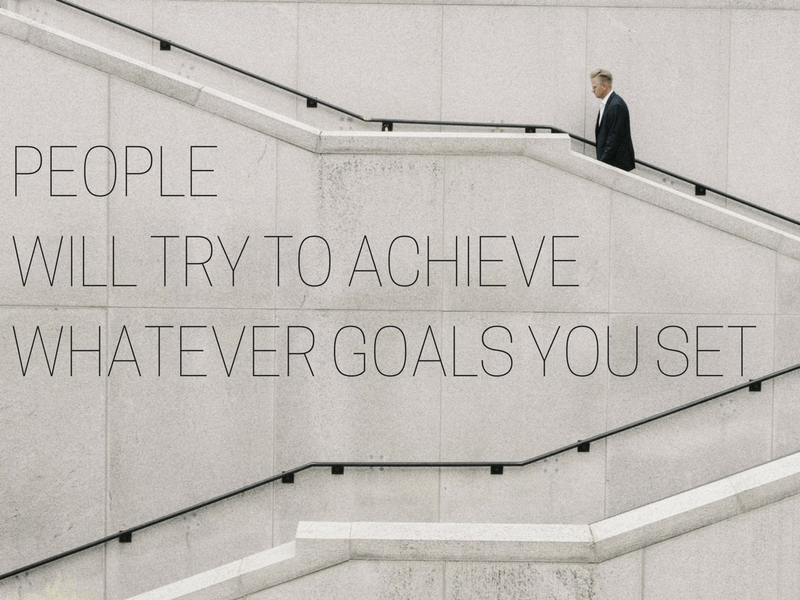 So you better make sure you set the right goals!

Flip through the annals of business history and you can find a ton of stories about unintended consequences as a result of decisions that align with set goals.

In my experience, the silo-ing of departments exacerbates this issue a ton. The more informed about the entire business someone is, the more likely they are to set a solid business goal.

An an example, imagine two teams at a SaaS company. One team is responsible for getting new customers to sign up (new trial starts, or NTS), another is responsible for onboarding them (trial to paid – or TTP). If the first team’s only target is a simple NTS number, they may not focus on the quality of the user they’re signing up for your product, particularly if your organization celebrates the raw numbers and expects an ever-increasing flow of NTS.

This causes a problem for the second team (among others). The second team should be trying to onboard the best type of user they can (aka the type that will have the highest lifetime value). However, if the users they’re getting aren’t that ideal user, they won’t have very much control over how many of the total users convert (which will fluctuate depending on the quality of leads coming in).

The seemingly simple solution to this is to set the goal of the NTS team as sign ups that fit certain characteristics (qualified leads), so that the TTP team can also have a goal of converting a percent of the qualified trial starts. I say “seemingly” because lead scoring isn’t that simple, but starting to think of your goals in a more sophisticated way will make it easier to ensure they’re properly supporting your business.

Someone who understands the entire customer journey should be more reticent to set a simple goal of NTS, because they could see how attracting, and potentially onboarding, users who aren’t a great fit will cause continued frustration as they become a customer (eg. being a Support burden).

Companies are getting better at rewarding people who think bigger picture, but as someone who works in SaaS I’ve come upon many people for whom there isn’t enough benefit to them in making their company more efficient.

To use Unbounce as an example, when talking to prospective customers, I’ve heard people refer to their in-house developers as “free” because they don’t need budget approval to use them. An empowered (and properly goaled) employee could see how economical and efficient a solution like Unbounce would be for their business, leaving time for their developers to work on other projects, but if they’re not rewarded for that kind of thinking, they’re unlikely to act.

It’s a simple formula: good goals = better performance. But it’s much harder to actually achieve. Spending time and energy making sure the right goals are set upfront will help a ton in making sure that everyone is moving in the same direction, and ultimately that everyone’s actions are benefitting the business.

Goal-setting is probably the single most important function of senior leadership at any company.